TO ENTER THIS SITE YOU HAVE TO BE 18 AND ABOVE. ARE YOU?

YES, ENTER
NO
The health benefits of beer

Thanks to the so-called beer belly, beer has gotten a reputation as a bad-for-you beverage. But beer can actually be a healthy drink choice. Sometimes, nothing but a cold glass of beer will do, especially when you’re at the game or visiting your neighbourhood pub with friends. But can sipping a pint be part of a healthy lifestyle?

Beer can be nutritious

Beer is made from hops, barley and wheat, so the beverage contains many of the same nutrients that grains do, including B vitamins, riboflavin, niacin and zinc. A bottle of beer can contain 92 mg of potassium, 14 mg of calcium and 48 mg of phosphorus, all minerals that are essential to a healthy diet.

Beer is also a source of soluble fibre, which comes from the barley. According to The Brewers of Europe, an organization that represents European breweries, two glasses of beer can provide 10 percent of your recommended daily fibre intake.

Beer contains antioxidants as well. A study published in the Journal of Nutrition and Biochemistry suggests that the levels of antioxidants found in blood are elevated after beer is consumed.

Beer can ward off disease

Many studies have found that moderate alcohol consumption may lower a drinker’s risk of diseases such as Alzheimer’s disease and diabetes, and can even reduce weight gain. But some research suggests that beer specifically may play a role in fending off disease.

A study published in the Journal of the Science of Food and Agriculture suggests that drinking beer moderately may ward off osteoporosis. The researchers found that beer is a good source of dietary silicon, which is important for bone growth and development.

Beer can be good for your heart

Whether you prefer wine, beer or liquor, people who drink one to two alcoholic drinks of any kind are less likely to suffer from heart disease according to a 2008 Journal of the American Dietetic Association article. Experts believe alcohol improves heart health by making blood less sticky so it's less likely to clot by increasing levels of "good" HDL cholesterol while lowering unhealthy LDL cholesterol.

That cold one has another hidden health benefit: it's a source of B vitamins such as folate, niacin, riboflavin, pantothenic acid, and vitamins B6 and B12. One 0.35l glass supplies 3 percent of the B12 and 12.5 percent of the vitamin B6 you need in a day. These two nutrients keep your heart healthy by lowering levels of homocysteine, an amino acid that may damage your arteries and encourage blood clots to form.

Beer will strengthen your skeleton

While heavy drinking can weaken bones, a couple of beers a day can make them stronger. Beer is rich in silicon, an element found in few foods and drinks, which has been linked to stronger bones. In a Tufts University study, men who drank between one to two beers a day had hip bone densities three-and-a-half to four-and-a-half times greater than teetotalers.

“Beer is as versatile, if not more versatile, than wine,” says Alison Boteler, chef and author ofThe Gourmet's Guide to Cooking with Beer. In America, it’s only been in the past few years that beer’s been viewed as an artisan product the way wine is. “Our friends in the wine industry got the jump on us,” says Samuel Adams brewmaster Grant Wood. “In some ways [the beer industry] shot themselves in the foot because they got paired with chips and dip and hot dogs. But…we can deliver flavor to the white tablecloth just as well as wine can. Beer is typically lower in alcohol and lighter in flavor, and it has spices that can really complement food.” [1]

Hundreds of delicious recipies were created to exploit the unique beer taste. A selection can be found here:

Spent grain is a biological left over from brewing in a “wet state”. As such it can be used for various purposes. It is very rich in proteins and an ideal nutrition supplement in farming. By far the most common use of spent brewers grain is as animal feed, primarily for cattle, but also for pigs, goats, fish and just about any other livestock. In a 2003 survey of 45 breweries, 38 said their spent grain was used as animal feed, mostly for beef cattle and dairy cows. [2]

Monrovia Breweries Inc. is very happy to support your agricultural project by giving away the spent grain for free. Due to the concistency and the volume it has to be picked up with a truck. If you are interested in this please contact our technical manager. 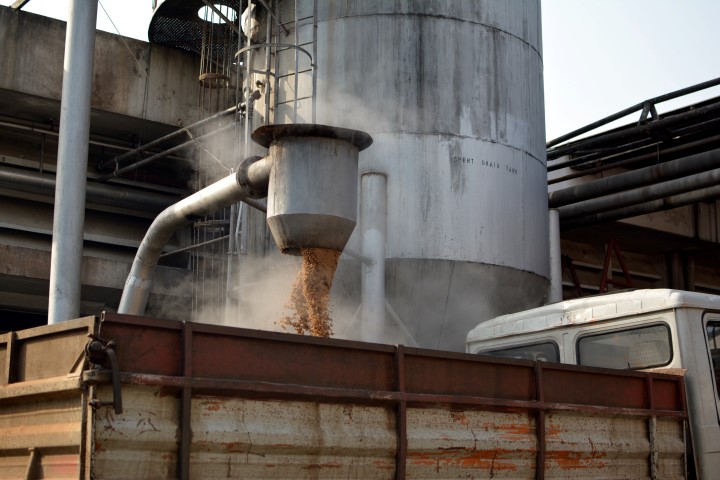